a fun ‘moldy-oldie’ record by the Coasters
with funny lyrics about a teenager being tormented by his folks into doing his chores.
.
‘you tell your hoodlum friends outside you ain’t got time to take a ride’

At an LA ice hockey game, kind of randomly weird but  – it’s ROY ORBISON !
He passed away shortly after this.

One of my all time favorite songs in a live performance from 2004.
Some people react to Robert Smith’s appearance, which has zero to do
with his talents as a songwriter & musician.  He is an individual who lives
as he chooses with no apologies.

Another great oldie that’s like a time capsule of emotion. I remember how I felt then,
the things I thought about, and how my room looked in the dawn as I got ready for
school with the radio on.

The memorable beautiful theme by Elmer Bernstein for the tv show ‘Hollywood and the Stars’, 1963-64;
also used for a time at the Academy Awards.  A lovely piece of music that so many remember and love.

I  love-love-love this photo !  It looks like something in a fairy-tale . . enchanting.

These places are in the hidden gardens of the Palácio da Pena ~ Sintra, Portugal.
.

I was remembering the time years ago when I was in France on a 2 month working vacation. A young man we worked with graciously took us to his family’s country home in a town near Paris  for a weekend.  (I’ve forgotten the name of the town).  His lovely mother still lived there, as she had as a young newlywed when the Nazis  occupied France in 1941.  Her husband was off  fighting in the war, it was just she and her mother in the house.
.
She told me that one day 4 or 5 Nazis came along the country road, barging into houses at will  ‘because they could’.  In her house they demanded a meal to be prepared, with the best wine, as they ransacked the house.  They opened books, inspected photos, opened all cabinets and drawers, etc.  They took jewelry, some other small family heirlooms, liquor, and cash, and flicked cigar ashes on her rugs…. just being the a–hole  pigs that Nazis were.  So it was not only Jews who were targeted, it was anyone they pleased to terrorize, including 2 frightened women alone… just ‘because they could’.
.
As this sweet lady was telling me about the incident she began to weep and sob.  At that point it had been many years since that day, but to her it was like yesterday.  My heart ached for her.  And  I realized I was in the very same room where  actual Nazis had stood, a living history — that blew my mind !

a favorite old song…1988 performance .
.’Things are gonna be much better if you only will ‘

Tom Neal before his boozey downfall and manslaughter conviction….

‘Daddy sang bass, Mama sang tenor, me & little brother would join right in there. . ‘
the 1969 San Quentin concert.   Carl Perkins wrote the song !
I first heard this song, Johnny w/ the Carter Family,  long ago late at night, on a powerful
vintage Zenith table radio – on a 50K watt country station, coming in from UTAH  to California.

Petronella Oortman  was a Dutch woman whose extraordinarily elaborate dollhouse
is displayed as part of the permanent collection of the Rijksmuseum in Amsterdam.
Built between 1686 and 1710, it features marble floors, porcelain dishes  and
specially commissioned artwork.
Her dollhouse was the inspiration for the 2014 novel The Miniaturist by Jessie Burton. ”The Dollhouse of Petronella Oortman’    painting by Jacob Appel (1710)

Dancers of the Casino de Paris ~ costumes
The Casino de Paris is one of the most well known music halls of Paris, with
a history dating back to the 18th century.   These hand-coloured postcards
depict some of the colourful and bizarre costumes from around 1915-1920.

There’s a nice land known as Iceland, living there is swell,
That’s where those frozen people dwell.
One supposes rubbing noses saves them lots of heat
Boy, how they’re making both ends meet!

Oh, let’s rub noses like the Eskimoses,
That’s a northern custom turns winter into spring
Each polar guy’s a hero when it’s under zero
You can always trust them to do that certain thing

When the band is playing Nola at the Polar Ball
You won’t find a blue schnozola anywhere at all
Let’s rub noses like the Eskimoses
Don’t you know that’s Eskimo for “I love you”?
⇔⇔⇔⇔⇔⇔⇔⇔⇔⇔⇔⇔⇔⇔⇔⇔⇔⇔⇔

I had the film video here but unfortunately it was deleted at its source
‘How Fast Was I Going, Offficer?’. .Barbara Stanwyck, Fred MacMurray  1944 Raymond Chandler wrote the dialog for the film

.Maggie McNamara, William Holden, David Niven
This one was hard to find for free, but success at last !

When I heard this song on the radio as a kid, I decided my calling was to be a Raylette !
That strikes me as funny now, but I guess I was born with ‘soul’ because I didn’t get it
from my folks or experiences in white-bread suburbia, that’s for sure.
Live – 1961

Oakland’s Paramount Theater is one of the finest remaining examples of  Art Deco
design in the United States, completed in 1931. After its initial brief blaze of  movie
palace glory in the 30’s, this remarkable auditorium suffered  three decades of neglect
and decline until its rescue by the Oakland Symphony and Ballet, the City of Oakland
and private donors.
………………………………………………..
A painstaking and authentic restoration was completed in 1973, and in 1977  was
declared a National Historic Landmark. The theater hosts a year-round schedule
of events and concerts.   Website

I saw Easy Rider here ⇑ on its opening day

The ‘Ancient  Lights’  Windows of England

On many old brick buildings around London  are signs saying  ‘Ancient Lights‘  marked  beneath
individual windows. The phenomenon is not unique to London. The signs can be found in Dorset,
Kent, and other places across England.  What are they?

‘Ancient Lights’ or the ‘Right to Light’ is an English property law that gives house owners the right
to receive natural light from and through a window  if that particular window has been receiving
light uninterrupted for  20 years.

Once a person gains the right to ancient lights, an owner of the adjoining land cannot obscure them,
such as by erecting a building, raising a wall or planting trees.

Coke, freshly delivered on your doorstep every morning, circa 1934

how great is this !

Found on Once Upon a Town    via  messynessychic.com/

Photochrom prints of Ireland taken between 1890 and 1900 and organized
by county, courtesy of the Library of Congress.

While Belfast’s main shopping district was a popular target of IRA attacks
in the 1970s and ’80s,most of the buildings in this image are still standing
after all this time.

With its picturesque trees and waterfalls, Glenariff Forest Park is a popular
tourist destination these days.The area is nicknamed “Queen of the Glens”,
the largest and most beautiful glen in the county.

Amazingly, this rope bridge linking Carrick Island to the mainland is still in use.
It has become a major tourist attraction. It has been redesigned and improved
over the years to make it safer. While the beaches of Portrush are still a draw for tourists, the town is now also
known for its dance clubs and Barry’s Amusements, the largest amusement park
in Northern Ireland.

You might recognize this famous icon from the cover of  Led Zeppelin’s
Houses of the Holy. The weird natural design is the result of an ancient volcanic
eruption. The hot lava cooled so fast  that it created deep, giant cracks  that
eventually  broke into the columns seen today. The River Avoca flows only through the County Wicklow, where it starts off as
two distinct rivers, then flows together at one point, known as the Vale of Avoca.
This vale is located inside the town of Avoca, pictured here.

The entire center of County Wicklow is made up of the Wicklow Mountains,
which are naturally adorned with a number of rivers and stunning waterfalls
like this one. This particular waterfall no longer exists since the Poulaphouca
Reservoir was completed in 1940. Up until the mid-1700s, Bray was a sleepy fishing village, but as the people
of Dublin started to seek sanctuary outside the crowded city,  the town’s
population grew quickly. By the mid-1800s the town had become the largest
seaside resort in the country.  These days, Bray is home to the country’s only
dedicated  film studios, Ardmore Studio, which has produced such classics
as Excalibur and Braveheart.

The River Dargle is named An Deargail in Gaelic, which translates to “little
red spot.” While it’s not obvious in this picture, the name is a reference to the
fact that most rocks in the river are tinted red. This beautiful hotel opened  in 1824   and is still open for business, currently
operating under the banner of Marriott International. The hotel even played an
important role in Irish history.  In 1922, it served as the meeting place for the
creators of the Irish Constitution. Room 112, where it was drafted, is now
fittingly known as The Constitution Room.

Officially known as  the Cathedral of the Blessed  Virgin Mary and St. Patrick,
this icon of Ireland was founded in 1191 and now serves as the National Cathedral
of Ireland. It also holds the record for the tallest church in Ireland, boasting a
spire that stands 140 feet tall.

The obelisk in the background is the Wellington Monument, found in Phoenix
Park, Dublin. It is the tallest obelisk in Europe, dedicated to the great deeds
of Arthur Wellesley, 1st Duke of Wellington. 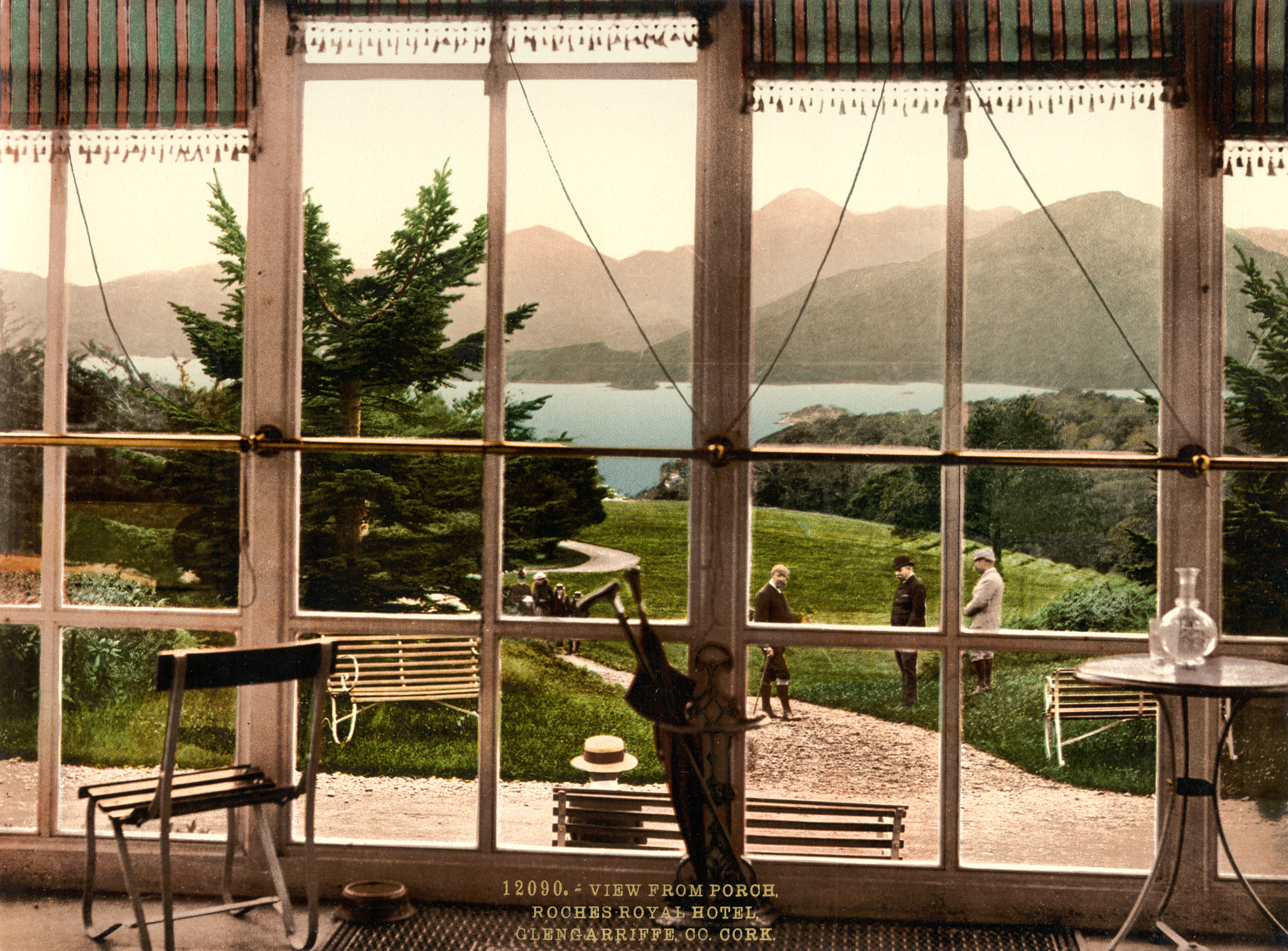 While this particular hotel may no longer be in business, the small town of
Glengarriff (pop. 800) is still a popular tourist destination of seaside views
paired with high mountain peaks and quaint peat bogs scattered across the town. The town is named for the Glengarriff Forest, Gleann Garbh in Gaelic, which
means “rough glen.” The forest is indeed home to a rough glen and some of
the oldest oak and birch groves left in Ireland.

Blackrock Castle  was originally constructed as a fort intended to keep away
pirates and other potential threats. While a few remains of the original building
still stand, most  was destroyed in a fire in 1827 and replaced with the current
structure that was completed in 1829. While the castle was used for a variety
of purposes throughout the ages,  it now serves as Ireland’s first interactive
astronomy center, which is open to the public. The Gaelic name for this city is Dún Garbháin, which translates to “Garbhan’s
fort”, referring to Saint Garbhan who founded a church there in the seventh
century.  These days, Dungarven is the administrative center of County Waterford.

Waterford is the oldest city in all of Ireland, established back in 914. One thousand
years later the city is still the fifth largest in the country. These days, Waterford is
best known for its crystal. Sadly, Waterford Crystal shut down its factory in 2009
after operating in the town for 225 years.Guests can visit the  Waterford Crystal
Visitor Center.

This stunning castle looks largely the same now as it did back when this picture
was taken, despite the recent renovations that have allowed it to become open
to the public. In the late 1400s, this castle was one of the strongest military posts
in the country.   In fact, during the Irish Confederate Wars of the 1600s, it was
one of the last castles to surrender; the leader of the battle only did so after the
castle was attacked via water—something no one inside the stronghold saw coming.

(photo: Swing That Cat).  Maryann on the left

the artist is Fred Packer

. . . all images via pinterest.com

1941 – Ray Eberle, vocals
My favorite version of the song, odd for its mix of happy lyrics & melancholy tune